In order to give you the very best experience, we use cookies to help understand how our our articles and content is used. This allows us to give you a personalized experience and to tailor the adverts presented. You can accept the Full Experience, or choose how you want to view the site.
Find out more in our cookie notice.

Over the past 50 years, antibiotics have revolutionized human and animal health. The continued ability to take advantage of these advances is critical to maintaining optimal health when facing a rapidly rising global population and the need to feed it.

Slowing the emergence of resistant bacteria is widely accepted as the leading global health initiative of the century. As we look ahead to determine what will be required to continue progress in this area, we should be proud of what we have accomplished. Since the U.S. National Action Plan for Combating Antimicrobial Resistance (AMR) was established in 2015, many improvements in antimicrobial stewardship, use, and mitigation of resistance have been realized.

The recently released 2019 Center for Disease Control’s Antimicrobial Resistance Threats Report highlights a number of these improvements in human health, including a decrease in antibiotic prescriptions to outpatient children of 16 percent since 2011, and a decrease in antibiotic prescribing to all outpatients (adults and children combined) of 5 percent since 2011. Furthermore, important legal changes to the veterinary oversight of antibiotics that took effect in January 2017 have resulted in significant advances in veterinary use of antibiotics. 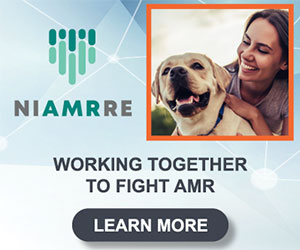 Together, physicians, veterinarians, and farmers have made great progress in improving the way antibiotics are used.

While we should celebrate these accomplishments, we all still have significant work to do.

In complex One Health issues like AMR, decisions and policies that are made without a complete and balanced evaluation of the down-stream repercussions on all health sectors can lead to unforeseen consequences on health, welfare, and food security.

My experience as executive director for the National Institute of Antimicrobial Resistance Research and Education (NIAMRRE) has shown that the key to continued progress is a collaborative, open discussion across all One Health fields involved in this issue. That means human, animal, and environmental health professionals working together to break down walls that hinder communication and meaningful collaboration.

By combining evidence-based approaches with open, balanced discussion, progress toward solving the AMR issue can be accelerated. I encourage you to learn more about how you can participate in that process at the local, state, and national levels, and to visit NIAMRRE.org for additional resources.